People want infinite amounts of the content they like. We want more episodes of the series we like, writing from the authors we like, and music from the musicians we like. The internet improved a creator’s ability to do this. The price of publication and distribution is basically zero, the only cost in this instance is in the creation. Ideally, creators, artists, or companies can leverage the power of the internet to give fans what they want: infinite remixes. These are new versions of the work not officially released by them. Kanye West is a prime example of this process.

One of my favourite albums recently is Kanye 2049. It’s not an official Kanye release, but many of the comments on the album are “if you told me this was created by Kanye himself, I wouldn’t be surprised.” It’s a fan-made remix album created by Toasty Digital, whose work garnered millions of views on YouTube and nearly a thousand patrons, paying at least $3 per month, on Patreon. He announced recently that he is working on Kanye remix content full-time. There are many similar remix projects to this, so how and why do they happen?

To start, a creator needs fans and then feeds those fans’ need for content. Kanye does this by releasing and performing a large amount of high-quality music, designing shoes and clothes, and other entertaining antics. He’s created a strong reputation and passionate fanbase. At some point, all of his official work fails to satisfy his audience. Fans always want more.

Although Kanye cannot create infinitely himself, he can develop the taste of his fans. He does this through releasing multiple versions of songs, iterating in public, leaking songs, and performing live. This subtly gives fans insight into what is right and wrong. His taste, what he thinks is good and bad, rubs off on fans.

Take the Donda album rollout as an example. Kanye played in-progress versions of songs over three live events. It can be understood as a taste-making process. Fans got to hear songs refined through the events. They heard different combinations of lyrics, instrumentals, features, and performances, and decided which versions they liked and disliked. All of this helps Kanye influence fans’ tastes to be closer to his.

With this developed taste, fans remix Kanye’s work themselves. They create alternate versions, remixes, rankings, mashups, leak compilations, “finish” leaks, chronicle live performances, and more. The internet is incentivized to do it. Fans who create and release content that feeds the infinite remix are rewarded with attention, praise, and often, money.

Fans want more so badly they pay thousands of dollars for leaks. Leaked music is teased by leakers who say they are willing to release it in a “group buy” where fans collectively pay. There are many examples of multi-thousand dollar group buys and a subreddit dedicated to them has 1900 members. More money leads to more leaks. More leaks lead to more attention on leaks. And so the flywheel turns.

Leaks are just one of many areas where there is supply and demand for infinite remixes. A search for Kanye West remixes on YouTube leads to thousands of videos, many of which have hundreds of thousands of views. A search for “Kanye live” leads to thousands more. 647,300 TikToks have been made using a cover of Kanye’s “Ghost Town.” A fan-made “unreleased” song tracker currently stands at 1103 entries long. People want more.

To give them more, Kanye is not only developing fans’ taste but providing them tools. The recently released Donda Stem Player allows fans to remix the work themselves on a small physical device that controls parts of the music. A few buttons control vocals, drum, bass, samples, change speed, loop tracks, and save them for later listening. The standard tools to create an infinite remix are always more complicated than this. Kanye is again innovating a way forward to feed the flywheel of infinite remixes.

The infinite remixes of Kanye make up a classic flywheel, a self-reinforcing loop of behaviours that builds momentum over time. It has five distinct stages: 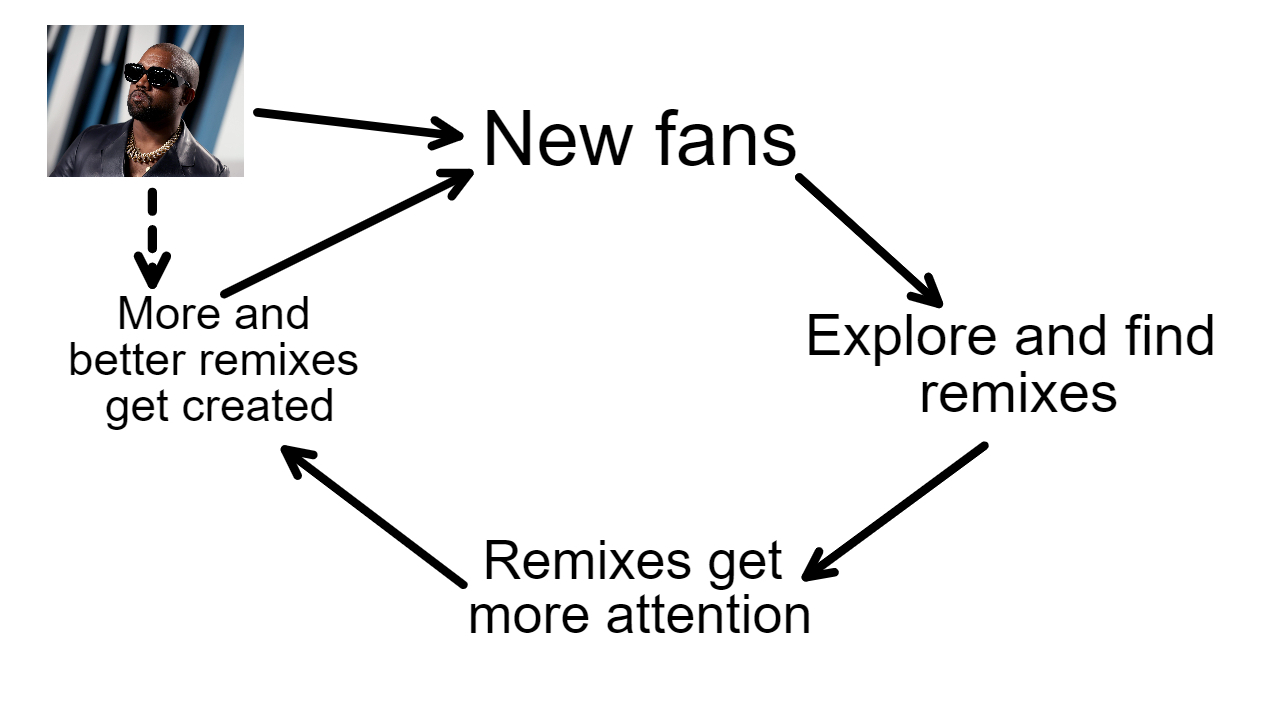 A true sign of a creator’s cultural power is whether their fans can keep the flywheel going infinitely. Travis Scott, Drake, Daft Punk, Kendrick Lamar, and many more have infinite remixes, but not the quantity or quality of Kanye’s. Other artists fail to create the flywheel because they do not successfully pass along their taste to fans. They don’t release the volume and quality, they don’t give insights into the process, and they definitely don’t provide the tools to remix the work themselves. Kanye is uniquely successful because he has such strong taste and provides the knowledge and tools for fans to develop their own.

This skill provides Kanye with more cultural influence. Everything he does, such as his shift towards Christianity, is amplified by fans through infinite remixes. This is how mass culture shifts happen. A talented artist creates a cultural flywheel that builds momentum into a mass movement. When supercharged with the internet and a hyper-talented artist like Kanye, the potential is limitless. Expect to see (and hear) the infinite remix of Kanye West for many years to come.

Thanks to Tom White from Foster for the feedback.

4 thoughts on “The Infinite Remix of Kanye West”